...TIME FOR AN UPDATE

Well it is nearly 2 months since that fateful morning in September...and how are we doing?

Probably better than expected and there wouldn't be a person in Christchurch and the surrounding areas without an experience to share.

Our hearts go out to those who have really suffered property-wise - although we have the EQC (Earthquake Commission) which is a Government body controlling an insurance scheme for this sort of event - they only insure each property (residential only) for $100,000 + gst.The balance of the insurance must be paid for by the owner to bring it upto replacement value.Not everyone has done this and many couldn't afford to ... this is heartbreaking for those concerned.There is a fund to assist but Kiwis are proud and unwilling to ask for handouts.The commission is thorough but slow and one has to become the 'squeaky hinge in need of oil' plus have a list of phone numbers where you can reach real people other than  relying on the help line!

To those visiting the City of Christchurch - little has changed.A few buildings are missing and there are a few cracks to be seen but the infrastructure appears to be pretty smooth and organized. Living here is a different matter - an earthquake or national disaster is a breeding ground for bureaucracy and departments that don't communicate... but I will not go there - I would hate to see our own path through the maze slowed by any indiscretion of mine!

We are progressing ...but slowly.The guest accommodation is back to normal.The slate roof repairs are hampered by a lack of slate suitable for The Weston House, which because of its Historic Places Trust  and Council Heritage listings (as high as they get for a residential building) has to match existing slate - so it has to be Welsh ... not Chinese or sparkly Spanish ( yes, there is 'sparkly' Spanish slate!.) 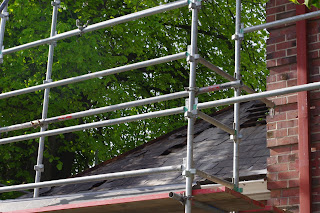 This wonderful house has stood staunchly through it all.

Even the aftershakes (2,400 to date)  are slowing ...we are all experts now and pretty good at judging the size and whereabouts.Some are a bit nerve-wracking - especially the 5's - nothing extra has broken (which is good) - the odd extra plaster crack has appeared (which is annoying). There have been media reports of people running screaming from shopping malls - which is true - but this is group panic and quite infectious - and these people have been through a lot and are stressed. Extra damage has occurred in some places but nothing compared to the
main event of 7.1  .

The media , as always , are only interested in bad news....and boy, are we aware of that - being stuck in Europe those first days after the quake - we relied on the Internet for news and it was all bad.I really believed that we would be returning to a war zone - flattened city, troops on the streets , no water or sewage , no electricity . Reports about The Weston House were bad ...but when we arrived - expecting the worst - I was amazed at how little damage we had sustained. Chimneys were all down and subsequently a lot of broken slate - but few breakages , some interior plaster damage but structurally we were A1.We were truly lucky and blessed.

So we are pretty much on target ...but the chimneys won't reappear for at least 6 months... looking identical but 70% lighter and strengthened to a very high rating.

Everyone is well, the grandchildren are gorgeous, the roses are early and the weather is fine.
...and gosh, I nearly forgot...the 2010 Sav.Blanc is the best yet...how could I forget that?...
Oh and something else... remember in our Guest Info I said that having sold my 1951 MGTD I was going to buy a Mini Cooper S? Well I have....and it's 100% pure magic ...and it's all black like my favourite Rugby Team.

Let's drink a toast to growing old disgracefully...... in the company of good friends and family.... 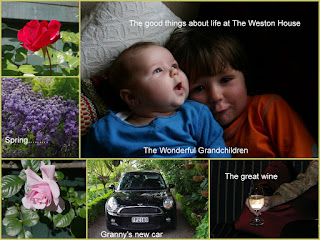 Posted by The Weston House at 3:55 pm No comments:

Posted by The Weston House at 4:29 pm No comments: