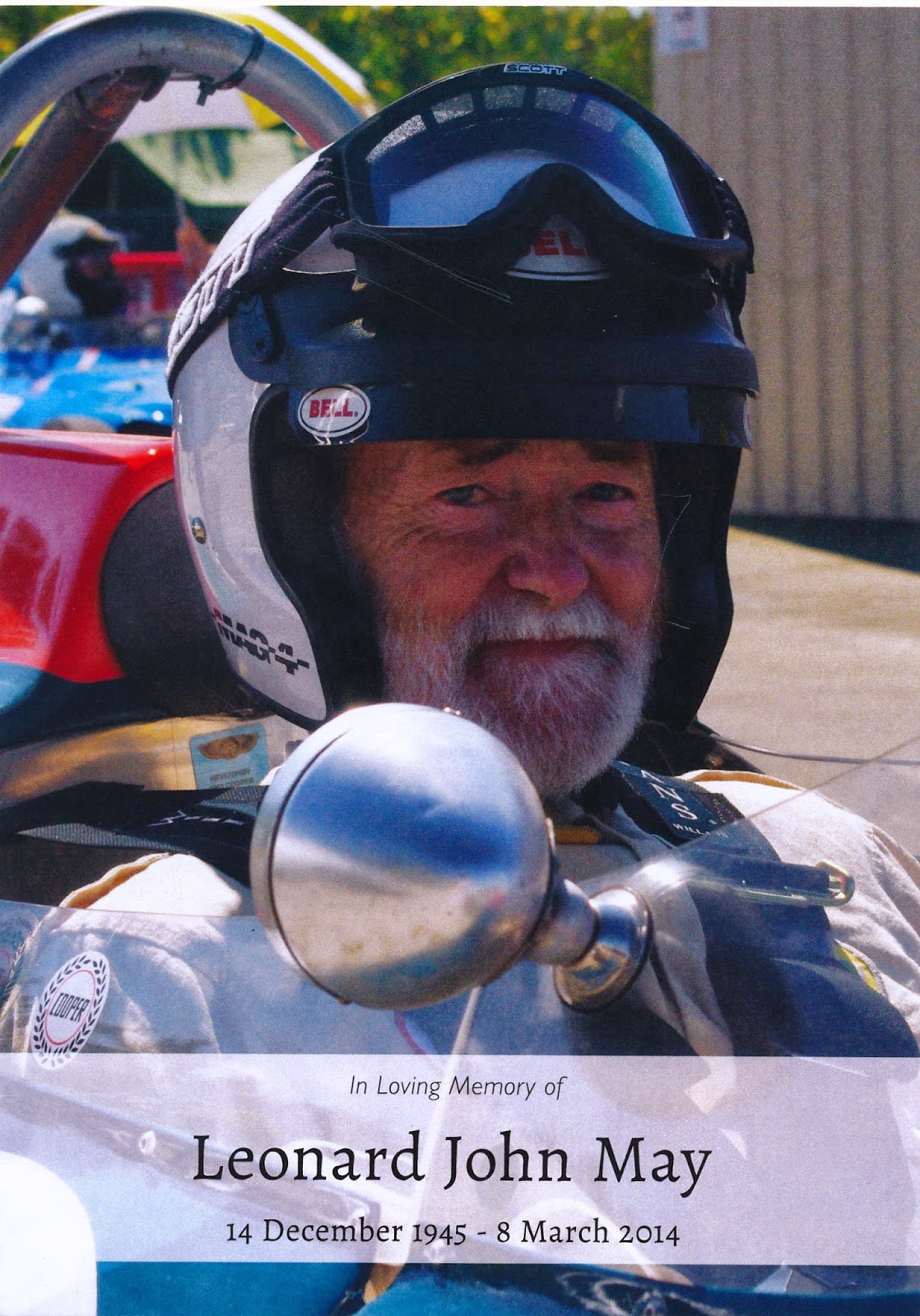 On Saturday 8th March 2014, Len was killed at Hampton Downs Raceway racing his pride and joy - a 1961 T56 Cooper Formula Junior, racing number 92.The love of my life and best friend is no longer at my side but will remain forever in my heart and the hearts of his friends and family.
We gave him a bloody fine send off  on the 14th March at St Paul's Devonport - he would have been proud but would rather not have been there.﻿

I'm sure he would have approved of the venue, an ex-church - after all when we moved to Auckland we bought an ex-church in Calliope Road, Devonport.

Here we made our home and had many happy times in a fine wooden structure of historical significance rather than a brick one.It was also here that we entertained new friends and treated lots of Christchurch friends to a little R and R - away from their damaged city and homes.

Len had not originally wanted to move to Auckland...it is foreign territory to those south of the Bombay Hills (an area on the southern fringe of Auckland ) but spurred on by the fact that we doubted that we would see Christchurch recover in our lifetime plus my own increasing discomfort living in the shaky city, he moved north .
He made that sacrifice more for me than for himself but that was the way he was ... mind you-  the proximity of two racing circuits helped....

Len quickly fitted into the new racing scene and once he got his car up and running was able race amongst (not 'against' as these are 'gentlemen' racers!) cars of the same type - Formula Junior - open wheel, single seated racing cars from the late 50's and early 60's. The best year of his racing life was last year when he competed in the FJ races in the South Island - The Southern Festival of Speed - without a single breakdown - it couldn't have been better. The people who worked on his car did a magic job and for once everything went according to plan.
Although he missed his beloved Ruapuna it was great to have like competition - even if Devonport was not the closest location to live in!

Our life together was one of shared dreams and realised ambitions. We were a damn fine team . Our tastes were similar, in fact almost the same ( sometimes I had to do a bit of 'slight of hand' convincing... sometimes he just said 'NO' ) but I am sure that was because we matured together - I was ten days away from being 18 when we started going out  and we married three weeks shy of my 21st birthday. Had to get my father's permission......
We shared a chosen profession in Pharmacy and as we grew our tastes and values were formed. One day short of our 46th Wedding Anniversary that all ended.

I have to count my blessings now and amongst them the most important are our children Rebecca and Andrew plus our wonderful son-in-law Pascal and our two grandchildren Calix and Jola.

I am progressing slowly - some good moments, some bad and some hideous. But that is to be expected - this grieving business is bloody hard work - and the price one has to pay for a long , happy and good marriage . Bec and Andy are also in that 'early days ' stage too but we are talking/Skyping almost daily and that helps us all . Jola and Calix - the gorgeous grandchildren are magic they don't understand grief as such - they are too little but they know that if they are sad then a kiss and cuddle makes them feel better and even when delivered by Skype they work little miracles.

Many of you were not able to be at Len's Funeral ( farewell 'do' actually - as we all toasted him with his favourite Sav.Blanc) but this is a movie clip compiled from family photos over his lifetime and shown during the service. Many thanks to Tomahawk.co.nz ( Gina, John and Brian ) for their many hours of work. Play it more than once as you will sometimes recognise yourselves and it so reflects Len's love of family, friends and cars ( plus a surprising number of photos including the odd glass of wine or a cold beer - maybe one of coffee! ) It is minus music due to copyright issues but think Joni Mitchell, Phil Collins, Genesis, and Billy Joel.

When you watch this video do it with a glass of wine in hand and drink to Len ( and pray for a long life for me to spend the money! ). We had both pledged to belong to the SKI ( spending the kids' inheritance) CLUB but that responsibility has now fallen to me ... I will do my best.

There are so many people I need to thank for their kindness, cards, flowers, phone calls , unending support and love.

I have received so many cards and would love to reply individually but in my rather addled state of mind I kept all the envelopes separately from the cards which means I have addresses but no idea who they belong to and cards from people who live God knows where. I suppose I have an excuse but it seemed like a good idea at the time.

Some amazing tributes have been paid to Len and this one in particular from Duncan Rabagliati was incredible, especially when you read about the Memorial Trophy..

I am very sorry indeed not to have been able to be with you today, but Stephanie, Rebecca, Andrew and family and all our NZ Formula Junior drivers are in our thoughts and prayers.
The Formula Junior family has grown over the last  25 years, and expanded across the Globe – Len was a very important part of this but also a true friend when we met on and off the track in NZ and Europe; and corresponded over many years
We will miss Len, dearly,  and his quiet humour , but feel sure that he would wish the camaraderie and friendship of Formula Junior to continue; FJHRA will recognise his memory  in a tangible way for posterity with a new Len May Memorial Trophy, to be awarded annually.
I bring this message, not only from Mair , Sarah and I , but from all Formula Junior drivers and their families in UK, Europe , and around the World

"I was fiddling with the Elan earlier this evening as I am at Goodwood on Easter Monday and whilst polishing away with an old tea cloth I thought again of Len and how much my own garage looked like his with plastic boxes and old filing cabinets and homemade shelves.  He had a wonderful write-up by Duncan in the FJ e-letter.  I did not realise how well known you both were in the FJ scene in the UK."

...of course it was Len who was well known - not me - I was the 'her indoors' who generally disappeared for a bit of light retail therapy during the racing while Len hung out with the blokes... mind you I did get to know a few of the blokes too and even held a brolly over Duncan's head while he waited in the pouring rain in Pau!

There is a picture in the video clip of that awful wet day - Duncan & the blokes were oblivious and Len was right in his element!

The following are the most moving words from two our life long friends and they tell the story of our life in a way that is so special to me that I keep reading them over and over.....

"...this is a hard letter to write - words don't seem right. How can I express my sadness about Len? Someone we have known most of our adult life - now snuffed out and gone in a flash- terrible! However prepared one thinks it's impossible to imagine the finality of death. This is the man with whom you have shared your life, had children, enjoyed love of food, houses, business, your gardens and cars. I am sure this is the man who has comforted you over countless sorrows and who has remained patient with your outlandish schemes!! He is the companion with whom you have travelled, whose empathy you depended upon and from whom you are bracing yourself to be forever deprived.The contours of living have changed shape........ " 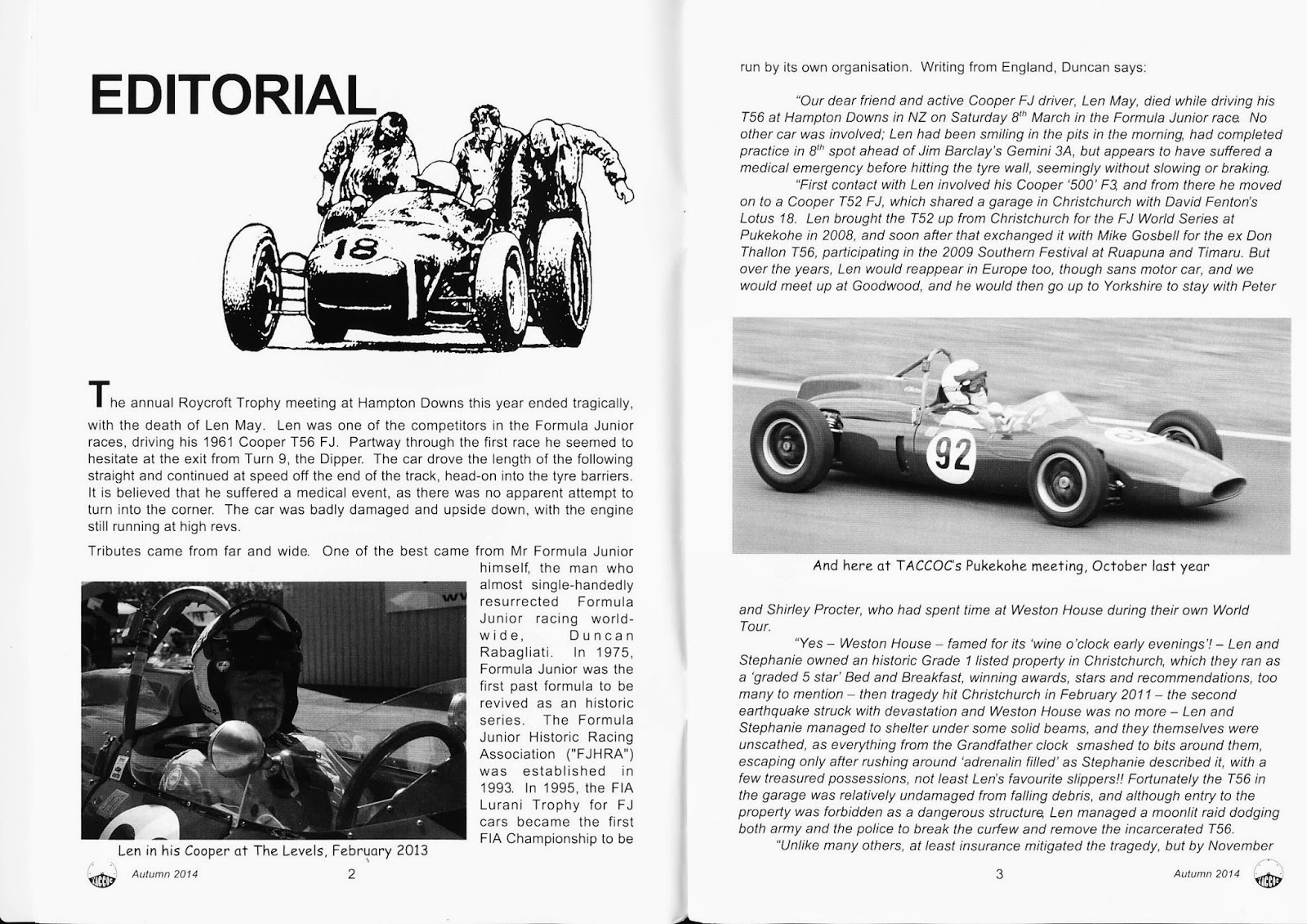 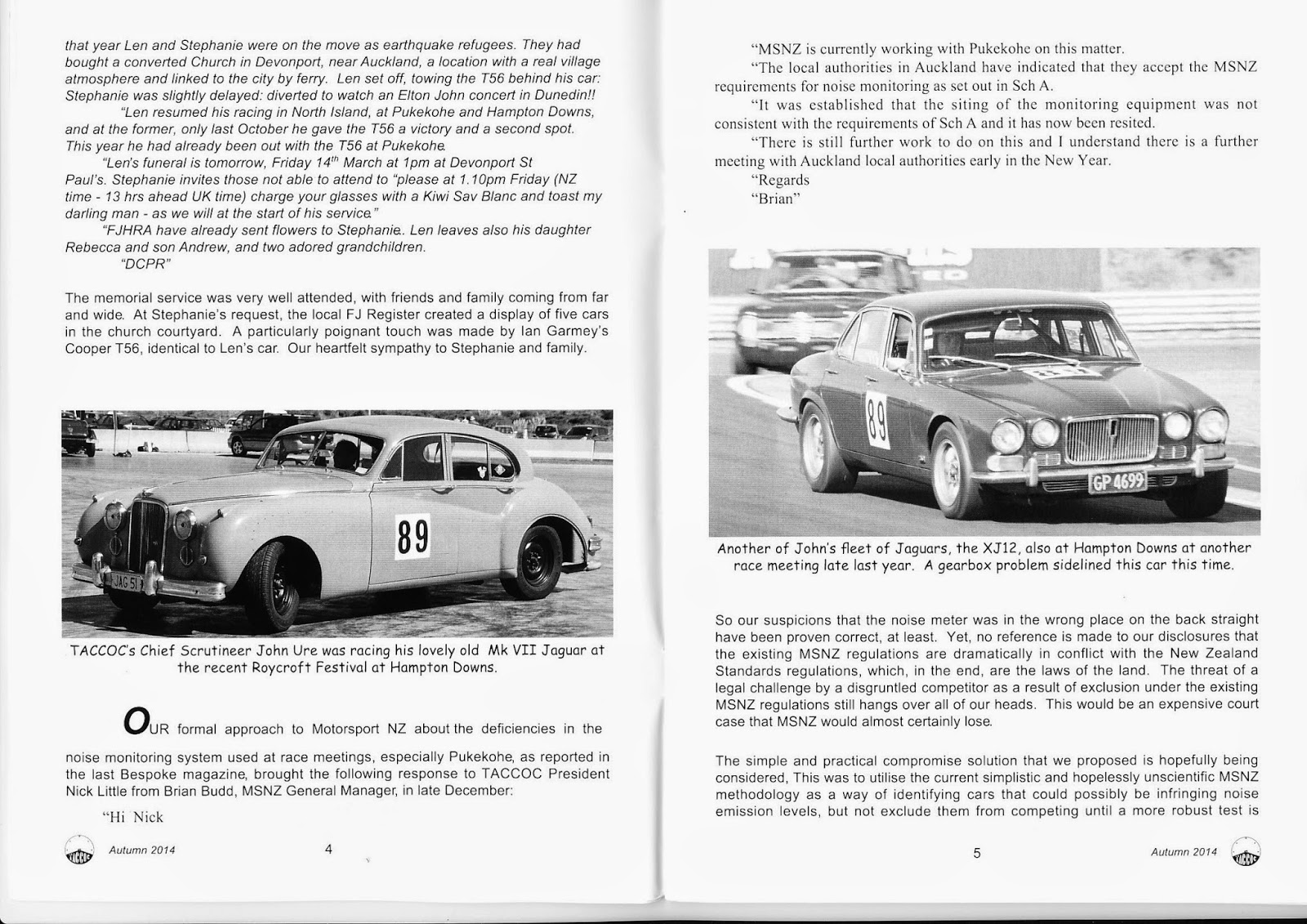 How can I ever begin to thank so many wonderful people who helped me and my family  over those dreadful early days - there are some who will never be forgotten by us - the family.
Peter and Kate Croft - Kate was with me when the Police rang to tell me - I was shopping for a wedding Anniversary Card. Peter was able to officially identify Len at the scene.Peter was Len's best friend.
Nigel Russell - who stayed with Len and was with him when he died
Those Members of the Waitemata Branch of the Vintage Car Club - who were at the scene and were deeply affected by what they saw.

Len was an organ donor and they were able to 'harvest' (their words - not mine) his eyes and areas of skin.
Two people have now had their sight restored with corneal grafts and the rest of his eyes and areas of skin will be used within the next few months. So a small part of Len lives on - that makes us as his family feel not all was lost. I urge you all to list yourselves as donors - regardless of your age you can still help especially with eyesight - it can be a wonderful life changing gift to be cherished by all.

On behalf of my family, thank you all so much once again for the respect you have shown Len and the support you have given us.
Thank you to all who helped make his 'farewell do' so memorable.
The Rev.Peter Beck who gave a fine and moving send off to a 'born again agnostic'  called Len.
Those who gave the Eulogies - Peter Croft( Pharmacy days plus cars,cars,cars), Brian Hamill (school days), Dren Errington (MG days), Nigel Russell and Roger Herrick (FJ days).
Those who displayed their beautifully prepared FJ's on the day - they looked magnificent.
To those I should have thanked but who I will think of later (senior moment... again)
Thank you. 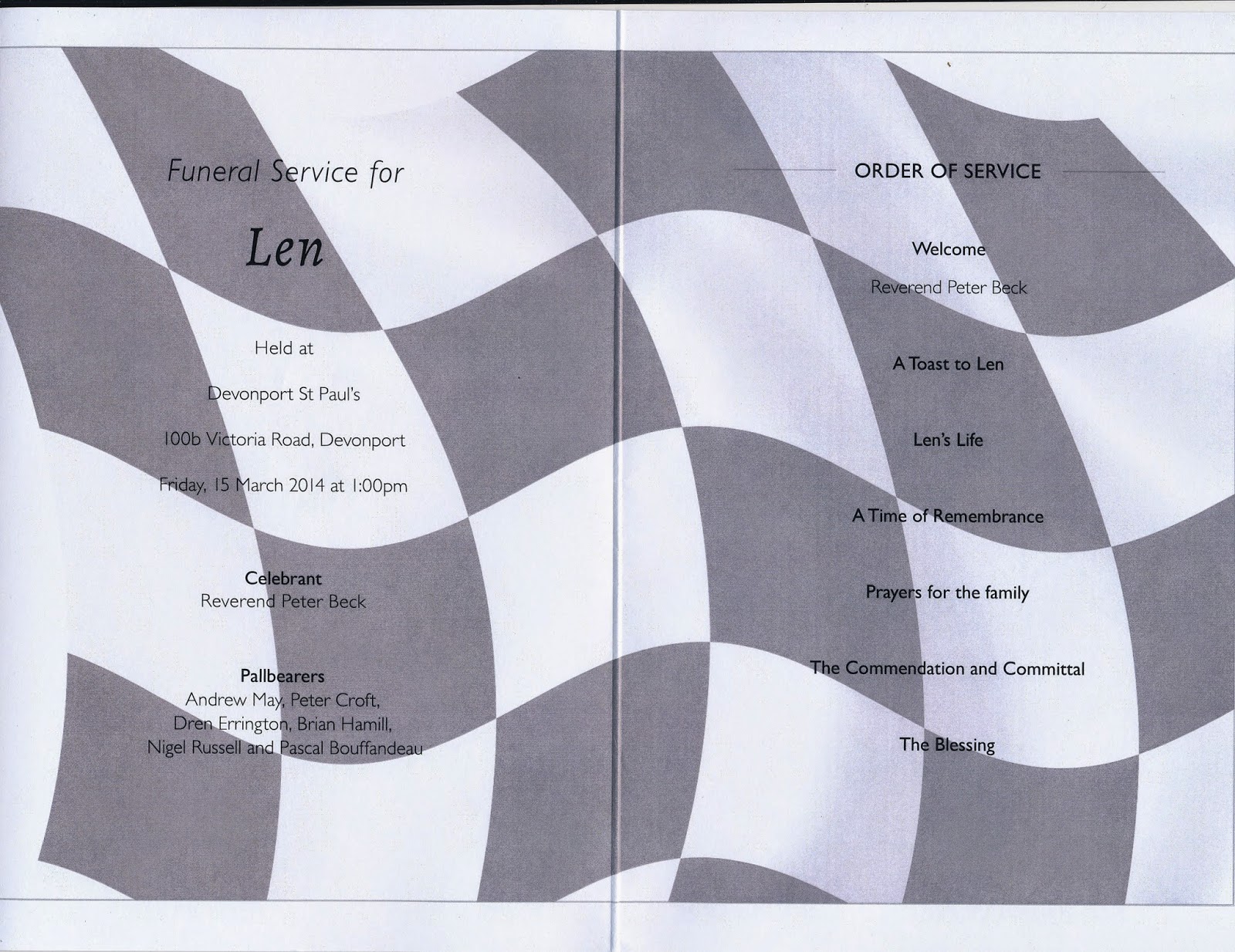 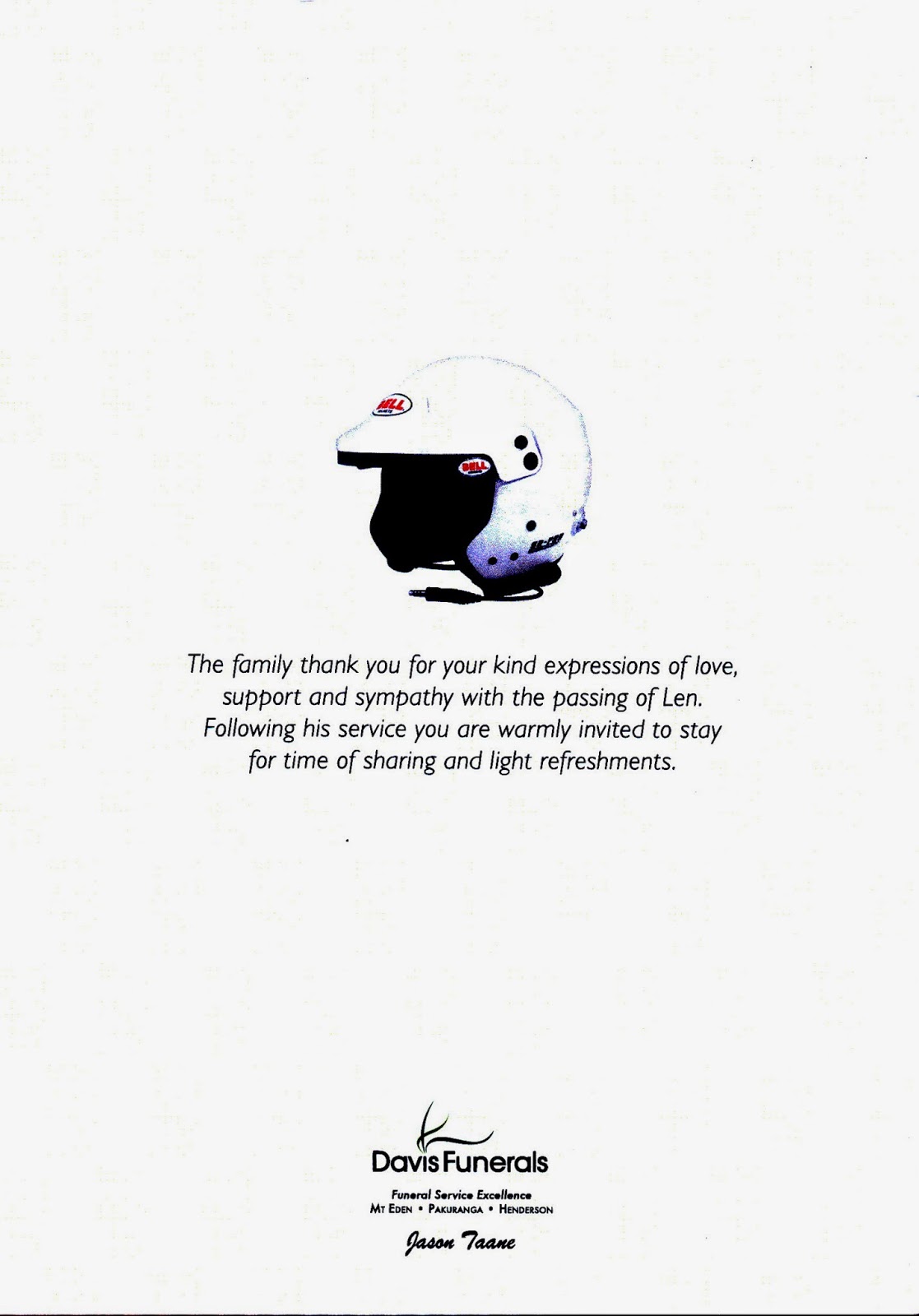