I simply can't believe we have been in Devonport for just over a year - or has someone snuck up on me and reduced the number of weeks in a year by half!
It has been an eventful year indeed - the first significant part for us was the sale of our land in Park Terrace and eventually our insurance company ( with a little persistent pressure ) paid up in fullish- well pretty close to it.
Compared with some of the trauma suffered by our friends at the hands of their insurance companies we are very lucky indeed. Many people have settled for indemnity ( which is zillions less than rebuild costs) and one couple we know were paid out less than 1/3rd of replacement ( which is downright evil) and have a court case pending. Grinding people down to the extent they believe they are lucky to get anything at all is appalling and no doubt some will be left with a debt burden because the payout was less than the mortgage while their land is languishing amongst vast tracts of other vacant plots.
To make matters sadder for some - this last week ChCh has had a heat wave, which resulted in scrub fires and the destruction of several homes - uninsured. Why? Because it is almost impossible to get insurance of any sort in ChCh post earthquake if you move house - I can understand why Insurers are reluctant when it comes to Earthquake cover - but fire? So you know why we are grateful that our insurance company was true to their word and consistent with their clients . The company is the Medical Assurance Society, which originally limited its membership to those involved with the Medical Profession (we were both Pharmacists in a previous life) - it will however now insure Member's families and other professions. This is not really a plug as MAS is a very small organization and not a store front operation, but compared with some of the big names out there they are gold. Insurance premiums throughout the country have gone through the roof and are now becoming capped at a level set by a registered valuer rather than a 'free fall' replacement  as in the past - but while I may not like the premium we now pay - I wouldn't touch the others with a barge pole - there are too many sad and bad stories out there.
So please don't forget the people of Christchurch. All have lost their City, many have lost their homes and many still are waiting for their homes to be repaired - while they live in conditions reminiscent of bomb sites, coming up to two years since the devastation of Feb 2011. For all those people worldwide who are living in disaster zones, I have a far greater understanding and sympathy and I wonder how they are faring in the years following when the news no longer features them.
Two very heartwarming occurrences happened during the last year .
We received a wonderful email from the man driving the bulldozer that demolished TWH . He had recovered photographs during the demolition ( ignored by the salvage people in spite of our requests ) and had saved them for us. He had given them to the demolition contractor to give to us - he hoped we had received them. I was so thankful as these were photos from my parents era and irreplaceable. His email expressed his distress as he demolished our wonderful home - his sympathy - coming from an unexpected source - was so moving and appreciated, as well as very humbling. There are some good people out there.
Secondly we received a wonderful email from a delightful American couple who stayed with us on their honeymoon - Jason and his gorgeous wife Jen were blessed with the arrival of Grace, whom they named Grace Weston - yes exactly that - what a wonderful living tribute to TWH. She is so beautiful and long may she continue to be so. Her gene pool is such of course, that she is already guaranteed those other necessities of wisdom and hopefully wealth.
There was also another heartwarming episode (in its outcome anyway). On 22 Feb 2011 - there was a car parked outside TWH which was destroyed by falling bricks.We were unaware that it had been occupied on the day - believing how lucky it was that no one was in it to be hurt . Little did we know what was to unfold - we received the following comment via our Blog
My name is Arun .......... and unfortunately my car (DNG...) was parked beside TWH on Peterborough street when the quake stuck on 28Feb. As the effect of the quake the chimney of the house fell on my car, at that time I was inside the car with my wife and 5 month old daughter. We were just lucky to survive but lost our car. 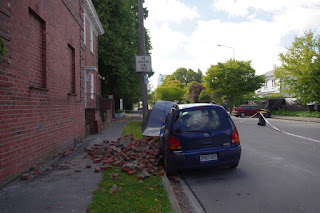 This was totally legit (even though the date was 22Feb not 28Feb - this could be forgiven under the circumstances). The Insurance company paid immediately. I don't know how I would have coped if a life had been lost - thank God none was. That makes it heartwarming.

Gosh but it has also been a good year - familywise (ok spell-check  says there is no such word - also not sure of its own existence).
Our daughter Rebecca married her partner Pascal in Bali in July . Guests traveled from all over the world - including our son Andy- who joined us from France. The grand children were at their magic best and Bali was a continuing delight - especially Ubud - which added another level to my shopping black belt! 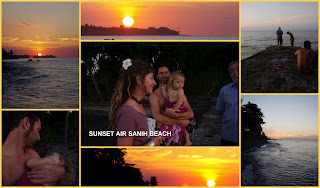 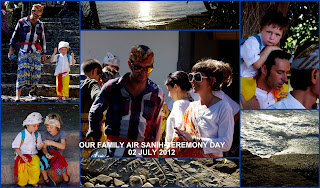 Our son Andy features with Rebecca in the picture immediately above ...no pictures of yours truly ( it's acknowledged by me and him-in-doors - that my arse looked far too big in the temple sarong to be published here - take my word for it!!!)
Andy stayed with us  for several weeks before he went south to stay with Bec, Pascal and the children while working as a builder in ChCh recovery. He is back in Auckland with us now with his lovely partner Kirsty before heading back to France for several months and an eventual return to NZ to continue building in ChCh. Lots of willing workers but the work is very slow to get under way...and we all know why!!
In September Rebecca (aka Bec) stayed with us for a few days with the children - they were sooo good and Granny/Grandad nearly kept them - except we had a date with Canada three days after they left - yes, the country - where we covered zillions of miles for six weeks. 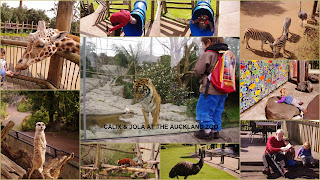 Christmas was beyond all expectations - it was the first time for years that we had all been together. Lovely Auckland summer's day - rainy, humid.... but it did clear in the Republic of Devonport for 2 hours so we could swelter in the sunshine and eventually get the BBQ working for typical Kiwi Christmas Dinner. 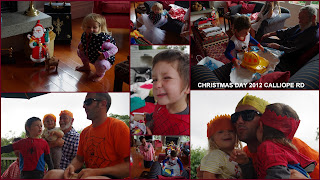 So here we are in 2013 - settled in Auckland...still having Wine O'clock - which is now  6.13pm - delivered by Len while I give you all too much information......
Many many thanks for all the cards and Christmas emails - it is so good to hear from you all....the nicest people ever - you have kept us going in good times and bad. God Bless you all.
A Happy and Prosperous 2013 and beyond...... Think of us while we travel ...while Len races his car (Southern Festival of Speed - here he comes)  and fly down to ChCh whenever the cheap flights are advertised - which is often.
Life is good and busy - we have space and friends who travel north to fill it - really lovely to see them.We head south - we stay with them.... and visit the two most important people in our lives - guess who?
Coming to NZ ... let us know...we have a secret....
Got to go...they (Andy and Len ) need feeding..
What exactly is retirement??????

Posted by The Weston House at 6:19 pm No comments: